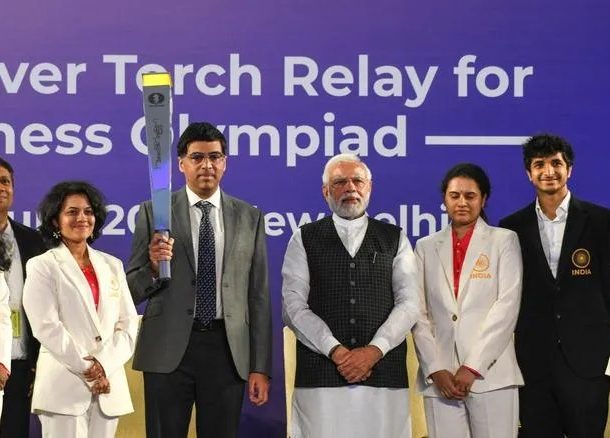 The highly hyped Chess Olympiad 2022 kicked off to a spectacular start when the Prime Minister of India Mr. Narendra Modi and the Chief Minister of Tamil Nadu Mr. M.K. Stalin were present for the opening ceremony.

Never was a chess tournament this popular in India. This augurs very well for the popularity of our beloved game.

Even before the event started the last one and half months featured carrying the Olympic torch through various parts of the country. Reputed Grandmasters and other enthusiasts and officials were featured in this exercise throughout the country.

What is the Chess Olympiad?

Chess is an individual game, but the Chess Olympiad is a team event where five players play in unison for their country and their total tallies are added up and decide the standings of each team.

Since this is the chess’ equivalent of the Olympics it has a very special place, and every country treats it with great pride and gives it their best.

There are very few team events in Chess and the Olympiad is clearly the crown among them.

How did the Chess Olympiad come to India?

This year’s Olympiad was initially planned to be hosted by Russia. But things changed drastically when a warlike situation broke out in March between Russia and Ukraine.

This led to a huge problem in FIDE as such an international event cannot be held in a zone that is marred by war.

So, when there was a crisis in FIDE with only 4 months remaining to host such a big and prestigious event, the Indian Federation stepped in with the able backing of the Tamil Nadu Government and agreed to conduct this event at such short notice.

It was quite understandable that no other country volunteered to organize such a mega event with limited time for preparation. For Indian Chess fans, this was great news, but for the Indian Chess Federation, this was a very tough challenge.

In hindsight, it turned out to be great and India came out with flying colors in organizing such an event in an exemplary fashion.

Chennai – The Chess Capital of India

With the Tamil Nadu Government agreeing to sponsor the Olympiad wholeheartedly, it was no doubt that the chess capital of India – Chennai would be the focal point of all further preparations.

Chennai is rightly known as the Chess Capital of India, the first International Master Mr. Manuel Aaron, and the first Grandmaster Vishy Anand both hail from there.

Not only that but also the maximum number of Grandmasters in the country hail from the state of Tamil Nadu and more specifically from the city of Chennai.

Even in Aaron’s times the local tournaments and Chess club culture were a unique aspect in Chennai, and this led to a proliferation of strong players unseen anywhere else in the country.

Now in the information age, a strong chess player could turn up from any corner of the country, but back in the day, it was important to have access to good chess publications and the opportunity to practice with like-minded players.

In those terms, Chennai has always been the trendsetter at the game of chess and remains to this day even though now the popularity of the game has picked up nationwide.

The Venue of the Chess Olympiad 2022

The venue of the Olympiad was Mahabalipuram, a coastal city around 50 kilometers from Chennai.

This is a historic city famous for Temple Sculptures by the Pallava Kings of yore. Perhaps the exotic location and the prospect of coming to India encouraged many countries to make it to this edition of the Olympiad!

Overall, the scenic place with excellent arrangements in Mahabalipuram promised to be a huge slugfest in terms of competition and a great atmosphere to enjoy Chess on such a grand scale.

What made the Chess Olympiad 2022 unique?

This Olympiad was perhaps the most looked forward to throughout the history of Chess.

India started the relay of the Olympic Torch almost a month and a half earlier. In the state of Tamil Nadu and particularly in the city of Chennai, there were Chess related advertisements everywhere.

There were buses painted with the logo of the Olympiad and even Napier’s bridge was painted in Black and White!

There was also a song performed that starred the Chief Minister of Tamil Nadu apart from the Oscar Awardee A.R.Rahman, especially for this Chess Olympiad.

Apart from all this Indian hospitality is well known and all the participants felt like it was the best Olympiad they had ever played in!

This year’s edition had a great number of youngsters participating from various countries. This is a worldwide phenomenon, and we must acknowledge the fact that Chess has grown considerably younger!

Even Carlsen commented before the event that he would be more afraid of the second Indian team which consisted primarily of youngsters rather than the higher-ranked first team!

Record number of teams participated in the Chess Olympiad

186 nations were participating in the Olympiad and India fielded 3 teams which meant that the tournament consisted of 188 teams – the highest ever that has been recorded till today.

This was really a huge achievement considering that there were some war tensions in Europe.

The Host always has the provision to field 2 teams, and if the entries were odd (in this case 187) it could field one more to make it even (188).

Hence, a total of 6 teams from India participated in the Olympiad – 3 in the Open category and 3 in the Women’s.

Among the countries that did not take part in this Olympiad, the notable ones were Russia, Belarus, and China.

Russia and Belarus were banned from participating by F.I.D.E because of their stand in the war against Ukraine.

For tournaments apart from the Olympiad many Russian players were playing under the F.I.D.E flag, but the same could not be done in the Olympiad, so they just could not participate.

As for China, it was surprising, perhaps it had something to do with the political relations with India, or maybe they had some other reason we do not foresee!

The top teams that were a part of the lineup were the USA, the top seeds, India and the team that featured the World Champion(Carlsen), Norway!

Apart from these, the C.I.S countries are always thought to be a formidable force in chess. Particularly, Armenia has always done exceedingly well in most of the Olympiads and similarly Ukraine.

In the Women’s section, the top teams were India, Ukraine, and Georgia. The absence of China and Russia meant that most of the teams were seeded 2 places higher than usual!

We will look at how the event turned out to be and what sort of surprises it held out for the readers in the next blog! There are no prizes for guessing that the young teams rocked the charts but in any case, adieu until the next article!